The History of EHS

One evening in mid-November 1909, a “gathering of ladies and gentlemen interested in horticulture” met in the offices of the Board of Trade (predecessor to the Chamber of Commerce) to found the Edmonton Horticultural Society. They elected officers for their new group and decided on one of its aims—beautification of Edmonton. They chose as their first president, Walter Ramsay. Though he was still a principal with the Edmonton School Board, Ramsey’s passion for gardening was about to transmute him into the city’s best-known florist and greenhouse operator. Alberta’s first Lieut.-Governor, G.V.H. Bulyea, was named honorary patron while John A McDougall, newly elected Liberal MLA, former Mayor (1897 and 1908) and Edmonton pioneer, was named honorary president. Vice-presidents were Messrs. How and Slade. Of the nine directors elected, three were ladies; Miss Astbury, Mrs. Heathcote and Mrs. Widdis. Mr. J. E. Stuart, described in the Edmonton Bulletin as a “well-known Irish Horticulturist”, was elected secretary-treasurer. Within weeks the Edmonton Horticultural Society had drafted its first constitution and by-laws. From these beginnings it went on to become a prominent, influential and long-lived organization whose deep roots in the community sustained it through periods of luxurious growth as well as through periods of stress and drought.

The original aims of the society were: to encourage the growing of flowers, fruits and vegetables; to promote the cultivation of vacant lots; and to promote the beautification of home grounds and public spaces. Walter Ramsay’s prominent greenhouses on Victoria Avenue have been re-created at Fort Edmonton Park. Among the twenty or so charter members was Mr. Frederick A. Hilliard who served the EHS in many capacities for over 40 years–five of them as president. 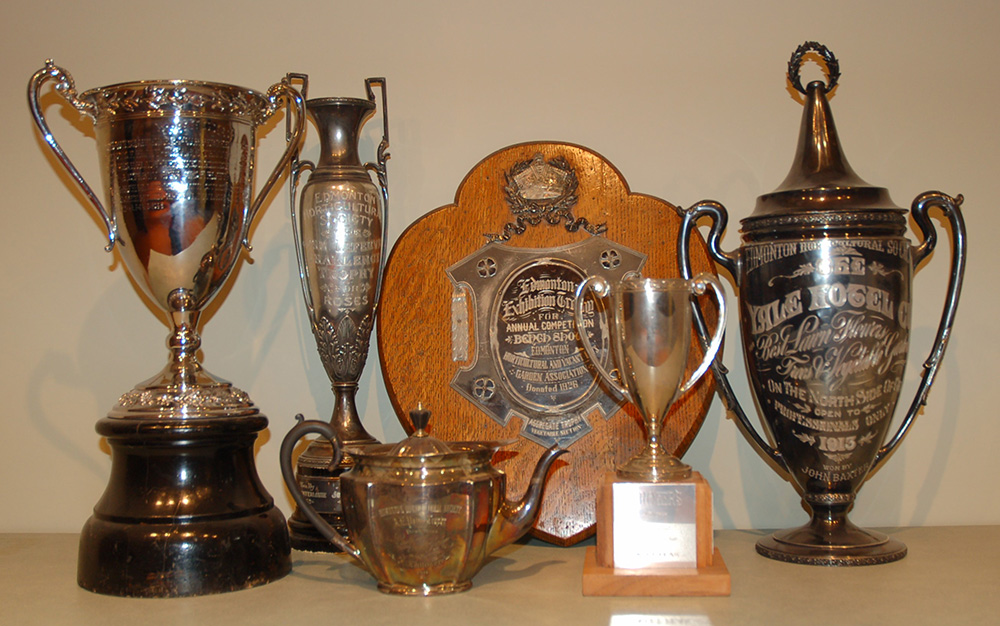 World War I brought food shortages which made vegetable gardening a matter of public policy. A Vacant Lots Garden Club, created in Edmonton in 1916 to promote the conversion of vacant lots into productive vegetable gardens, was almost immediately absorbed by the EHS. From 1916 until some time in the early 1990s the EHS acted as the City of Edmonton’s agent to rent out city-owned properties to home gardeners. The society even changed its name to become the Edmonton Horticultural and Vacant Lots Garden Association although unofficially, “Edmonton Horticultural Society” remained the popular moniker. Until well into the 1950s the renting of vacant lots was one of the EHS’s major programs. By 1924 the EHS had hired a full-time secretary to administer the program and, by 1930, the number of lots rented each year had increased from 200 (in 1916) to 2200. During the Great Depression hundreds of lots each year were allocated rent-free to citizens on relief. The EHS, in conjunction with the City’s Special Relief Department, set up competitions for relief gardens which ran during the worst years of the depression. In the 1940s it was not unusual for the EHS to administer the rental of over 4000 lots per year but, over the next few decades, the numbers of lots available dwindled; in 1978 120 lots were rented.

A stalwart champion of the vacant lot program was William J. (Bill) Cardy, an employee of the City of Edmonton who worked tirelessly as a volunteer to promote the many virtues of gardening. Cardy believed that gardens were a public good and gardeners of all sorts were people who added value to the community in which they lived. He served as the EHS’s president from 1925-1927 and then continuously from 1936 until 1952. With other members of the EHS he formed an Edmonton Tree Planting Association which was active in Edmonton for several years in the 1920s. During his last few years as president of the EHS he was instrumental in the formation of the Alberta Horticultural Association, becoming that organization’s first president.

Many of EHS’s directors and presidents have taken an active role as promoters of the City Beautiful Movement. Gladys Reeves, an Edmonton photographer who became the EHS’s first female president in 1924, was known for public speeches in which she promoted gardening and tree planting as expressions of civic duty. Reeves enjoyed being in the public eye and she often chaired the EHS’s publicity committee. Reeves was one of many who thought that the annual vegetable and flower shows sponsored by the EHS (also referred to as the “bench” shows) was one of the best ways to promote gardening and to support and inform home gardeners. Reeves helped to raise the profile (and tone) of the annual shows by arranging elaborate entertainments featuring musical and dancing groups, by ensuring that prominent politicians were on hand to make the awards and that the shows were prominently reviewed in the local newspapers. The shows were the central feature of the calendar year for the EHS from its beginnings until at least the 1960s. Gradually, however, the numbers of entrants diminished and, in the mid 1990s, the bench shows were  discontinued. 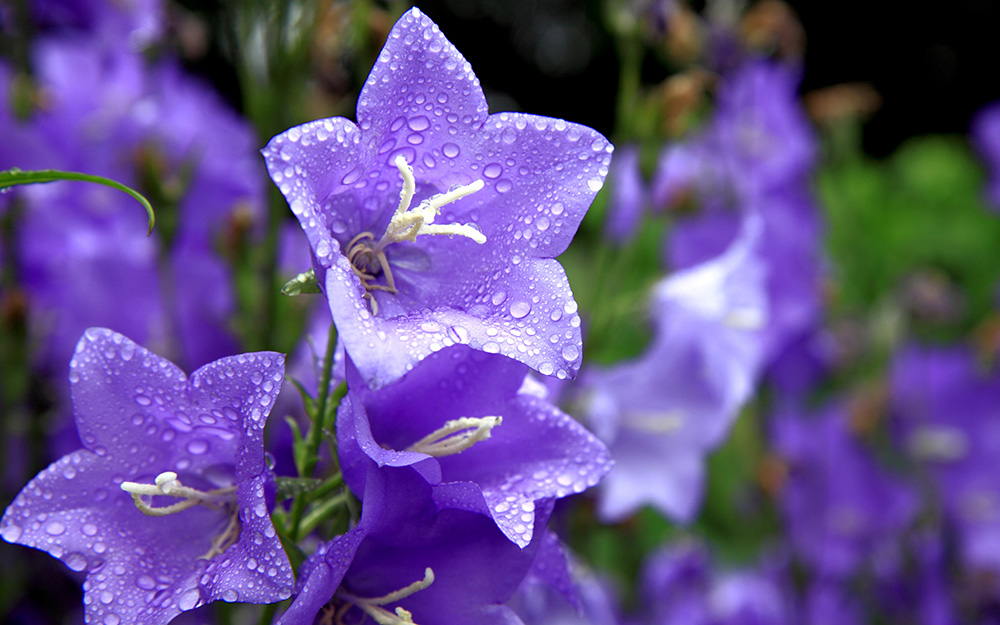 Another longstanding program sponsored by the EHS is the annual garden competition. In fact, annual garden competitions in Edmonton pre-date the formation of the EHS. In 1907, William Reeves, father of Gladys Reeves and also reputedly one of the EHS’s charter members, won Edmonton’s first annual garden competition which may have been sponsored by the Edmonton Exhibition Association. The annual garden competition, run by the EHS since its formation in 1909, has been popular ever since. Changes to the entry categories reflect changing garden fashions over the years. In the 1940s a frequent winner of the home grounds challenge cup was Hilda McAfee, who was often referred to locally as the “Alberta Rose Queen”. Hilda McAfee’s renown as an enthusiastic gardener earned her an appointment in 1955 as Fellow of the Royal Horticultural Society, the first Edmontonian to be so honoured. After Hilda’s death in 1960, her husband Jim McAfee played a prominent role in the EHS, serving as honorary president for several years before his death in 1983.

Many Edmontonians have won the top prize year after year in the EHS’s annual garden competitions. In 1972, Ralph and Angela Rosenthal were awarded the first prize for the ninth time in 11 years and were asked to refrain from entering to allow others a chance to win. In 1979 Mary Shewchuk entered the EHS garden competition for the first time. Over the next two decades she won more than 50 awards.

EHS’s Relation with the City of Edmonton

Since its formation in 1909 the EHS has worked closely with various departments of the City of Edmonton. The vacant lots program worked to the advantage of both entities: it gave the EHS a steady source of revenue and it saved City officials the administration costs and headaches of dealing with hundreds of gardeners each year. For three quarters of a century the EHS’s office and centre of operations was in either the Civic Block or the City Market Building. For decades the Mayor was listed in the EHS’s annual “Prize List” as one of the society’s honorary patrons and the city generally took a full page advertisement in this booklet extolling the work done by the EHS in city beautification. The EHS undertook several beautification projects on behalf of the city–a model garden in Market Square in the 1930s, a centennial rose garden in Coronation Park which lasted until 1984 after the construction of the then Space and Sciences Centre, and countless others. The alliance between the EHS and the City continues today, mediated through programs lodged in Community Services. Communities in Bloom.

Over the years some of the more illustrious members of Edmonton’s horticultural community have associated themselves with the EHS. George Harcourt, the University of Alberta’s first Professor of Horticulture (1915-1935), was an active member. Ernest Stowe, the Province of Alberta’s chief gardener from 1919 to 1952, became a member of the EHS shortly after he arrived in Edmonton in 1913 and remained an active member until he retired and moved away from the city. Stowe served as a director for many years and as president in 1932, 1933 and 1934. Robert Simonet, the famous Edmonton plant breeder, was a director of the society in 1943 and was appointed honorary president and honorary horticulturist in various years throughout the 1960s, 1970s and early 1980s.

EHS has now passed its own centennial and continues to  attempt to retrieve and record its past while continuing to preserve and extend its joint service to Edmonton’s gardening community and to the cause.